I was thinking about the new sex partner I would entice when I dragged my party jeans on. He would be tall and mean; also slick, also entirely my type. I practiced my trivial fucking lines in the mirror (“No I love your writing”), overdrew my red lips, shook my newly black hair and I was ready to go.

But first, my roommate, who knew about my plans, had to tell me about how great his buddies are: “He’s a really good guy!”

“No you’ll love him! Good buddy of mine!”

It had been a while since I had been myself: flipping my hair off my shoulders (I’ve had it extra short for five months), gently teasing and also caressing the egos of men. Of course I was hesitantly interested in his very precisely described friends.

We took whiskey shots and walked to the hotel karaoke night.

The first gentleman I met was a 30-something Croatian in some pretty, ugh, slick sneakers who said it was his first time in Toronto. He told me he was staying in Mississauga and gargled out a laugh and smooched me on the mouth. I fear that my tone suggests a cool indifference, but trust me I was loving it. His delusional joy was infectious.

I could say I was already in a deluded state thanks to the Croatian. The heartless truth is, I knew the next dude I met was a sure thing; he was one of those great guys. The details of our conversation are unimportant (unremembered), but the important thing is that, after we made out, my overdrawn red lips were all over his fair-skinned face and it made me sick, so I said, “Ok, lets go home.”

He shivered waiting for the streetcar that never came, so I wrapped him in my fake fur coat. He insisted on taking a cab. To add embarrassment to his already red face, he had no cash, so I paid the eight-dollar till.

We drank boxed red wine in my dank basement kitchen; I kept my high-heeled boots on while I talked about my perverse sexual preferences and told him his job was lame and straddled him to make out.

I took him to my room and felt awfully slick when I keyed “Hey ***, what do you want to do tonight?” into my typewriter. I’m sure he felt slick as fuck when he wrote, “Kiss you some more and practice my typing…” Well, that’s all that happened. Soon we fell asleep. 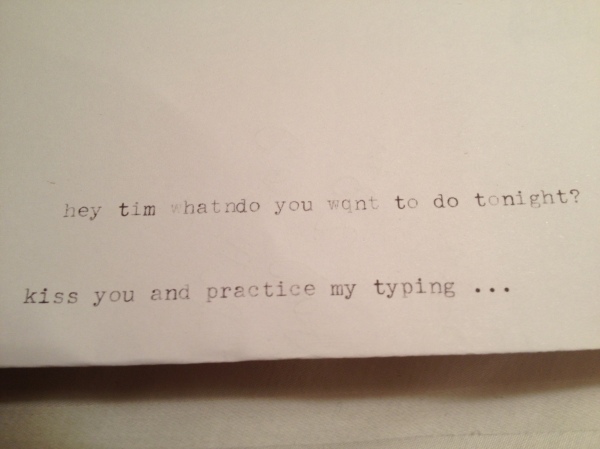 At 7 AM I told him to leave because my folks were coming soon for breakfast. He dressed quickly, and before he left, I called him over to give me a kiss on the cheek. As he said goodbye and failed to ask for my phone number, I saw that just around his mouth, his face was still bruised red from my red lips.