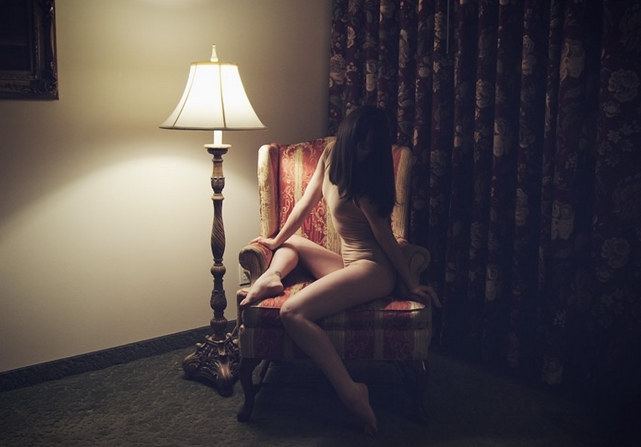 Sipping vodka through a straw at the bar in the hotel, I awaited my man’s arrival. We were celebrating our anniversary and although we lived in Toronto, felt like getting a room in the city would serve as a sexy, temporary escape from our everyday lives. It was raining lightly outside. I felt nostalgic as I reflected upon our relationship while sitting in the bar, staring out the hotel windows, but I also felt exceptionally present as I fantasized about the night that awaited us. I wanted to play the part of the sexy, mysterious girl tonight so I went to the hotel just a little bit early, early enough for him to find me slightly tipsy off top shelf vodka. I had packed a corset and a half of cocaine, just in case the night got wild.

He met me at the hotel bar, threw the bartender some money and a generous tip, then escorted me up to our room, roses in tow. I felt a bit like a call girl, high class of course, except for the flowers, which reminded me I am indeed a well-loved woman. The room was gorgeous; its contemporary design reminded me of our living room—the way the reds, browns and blacks wove together. But it was not enough of a reminder to make it feel like home. I was very coherent of the fact that we were somewhere else, and that was exactly what I wanted. I wanted to be displaced, seduced, and fucked. I wanted him to devour me, and I him. Anniversaries are a time for lovemaking, for romance, but I wanted a little bit of lust thrown in. I wanted him to want me. I wanted him to take me.

I feel like this sometimes and I let it come out in hotel rooms. Hotel rooms are where I can play the part of the whore and the devout girlfriend all in the same act; with an audience of one I can be anyone.

It did not take long for the desire for hotel sex to set in. There’s something about being in a hotel room that makes everything feel a little bit elevated, as though nothing is real. I excuse myself to slip into something else. There’s something, too, about the act of changing in a room full of mirrors that makes you aware of your body in ways you’re not always coherent of. The curves of your hips, the way your breasts sit. You pause for a moment to wonder if they’ve always looked like that, but the thought passes quickly. You take things off quickly, too, but put them on slowly. You want everything to sit just right, to hit your body at the right parts. You adjust the knee-high stockings so they’re at the same level. You know he’s in the other room, waiting. You wonder, is he clothed? Naked? Does he have something special planned? Has he topped up the wine like you want him to? You lace the corset tight into place; adjust your breasts. You remember the cocaine. You remember the romance. You make yourself forget the cocaine, for now. You fix your makeup. Make your eyes a little blacker, your lips a little redder. You turn your head upside down to give your hair some volume. You step into your black pumps, your Steve Maddens. You do one last look. You open the door.

No, you slide the door. When you’re a woman of mystery and desire you slide the door so that the noise piques his interest but he doesn’t see you right away. When you step out you want it to be so hot that you feel him get hard. This is the woman you are being right now, and she is confident and seductive. She is an alternative version of you, but she is still you. You take note of that. That this is you.

On a Tuesday night in a hotel room in downtown Toronto you transform. It is your favourite part about hotels. The music playing is the playlist you made together with this night in mind because without saying it you both know how hotel nights go, and so at first when you’re settling in it’s kind of sweet and sentimental, but by the time the first bottle of Bordeaux is gone, it’s dirtier, grittier, hotter.

The song that comes on as you slide open the door is perfect and sludgy with the kind of back beat that makes it easy to sway your hips. It makes the charade almost effortless, when the soundtrack is so good anything is possible. You walk slowly to the bed, as you move your body and mouth the words, as you prepare for what’s to come. You push him down before you kiss him, because even though he already wants it, you want him to want it more. That is the woman you are being tonight. She’s a little meaner, a little feistier than usual. She gets what she wants. He lets you have him, lets you work your mouth to where he wants it, and then he turns you over and takes your clothes off one by one. He does it slowly. He makes you want it, too.

You fuck. I fuck. I let the woman I wish I always was rise from somewhere inside of me and I take on this character for the night. By now I’m also a little drunk. If I smoked cigarettes I’d have had five by now, but I don’t smoke cigarettes so I drink and do occasional lines when I’ve got the money instead. I remember the cocaine and we’re both exhausted and drunk enough that he can’t even get mad at me for bringing it, the offer is too tempting. I pour a pile on the bedside table, its mahogany finish in stark contrast to the white of the drug. I take a 50 dollar bill, one of the new ones, and place it on top, sliding the hotel room keycard over it until it turns into a fine powder. Doesn’t it look pretty? Almost like snow, like the seasons are changing. I use the key to cut four lines. He lets me go first. They’re pretty even, but still I take the one that looks the biggest. It’s an illusion, but everything is right now.

When the coke is gone and the wine is gone we get dressed and head upstairs to the rooftop lounge overlooking the entire city. You can see the water and the CN Tower and the skyscrapers, those already built and in development. You can see the city changing. There’s a slight chill in the air and he pulls me in close as we point to the area where we live. You can almost see our house from here, if you pretend hard enough. The night slows down. I melt into the moment and lose a layer of my mystery in the process. But I know it’s okay. The act may be ending, but it’s not over yet. After a few drinks, we go downstairs to go to bed, kissing as we fall asleep. Tomorrow we’ll wake up as us again, but for now we’ll enjoy the fantasy.

Photo by Elle Hanley, part of the hotel series. To view more of her work, click here.