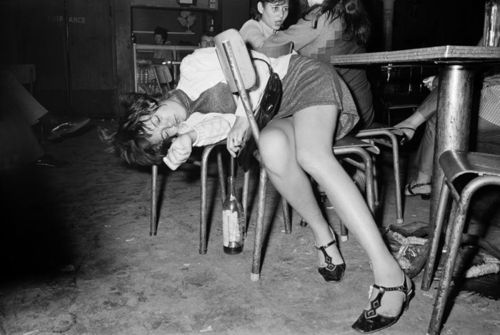 The last time I touched cocaine was January 31st. Had I have known it would be my last time, I probably would have done things differently. I would have picked up an eight ball instead of a half and stayed awake all weekend. I would have thrown some sort of epic going away party for the dirty little habit that had taken up much of my twenties.

I had quit before, but was easily seduced back into its familiar arms. Cocaine promised to take me somewhere better than where I was, to a version of reality where I was happier, where I could forget about the depression and anxiety that plagued me, the things that robbed me of my confidence and grace. I wasn’t as sad as I used to be, or at least I didn’t think I was, but I still had this shadow that followed me around. Cocaine was like sunshine in comparison, and so I always returned. But something felt different this time.

It wasn’t so much that I was sick of the drug. There’s a reason I liked it for so long, a reason I was late for so many parties, and then, once I got to those parties, why I was always one of the last ones to leave. There’s a reason I spent way too much money on it over the years, an amount I don’t particularly care to calculate. I was just sick of me being on drugs and I thought about this as I put on my shoes and headed to the party. But later, after a few bumps in the bathroom, I pushed the thought away and my night turned into a blur like all the others before it.

I woke up on February 1st and, as I began putting the pieces together from the night before, I realized I didn’t want to be that girl anymore. I replayed the night’s events over in my head thinking, was I the only girl high at the party? There used to be more of us. But over the years, people trickled off. Some quit. Some went to rehab. Some disappeared. It used to be that cocaine was everywhere—or at least it felt that way. Sometimes when I was trying to do less I would tell myself I’d only do it if someone offered it to me, knowing that it would indeed be offered to me a some point in the night. Life felt glamorous like that. I felt like a woman from a rock and roll memoir, a wild child. I felt like I had a secret that made me interesting, which is such a cokehead thing to believe, that doing coke makes you interesting. It doesn’t.

If it was a rock bottom, it was a quiet one. There were worse lows scattered across the half a decade I spent dancing that line between a bad habit and an addiction. There were nights that ended with intense fights, and others with minor interventions. There were nights I don’t remember, and scars I don’t have stories for. I have been high in the presence of people I should not have been high around in situations I should not have been high in. On occasion, I bought the drug instead of doing something more responsible like paying bills or buying food. Once or twice, I found a baggie in my purse at work and did just the tiniest little bit, to even out. One time I rubbed it on my teeth as my boyfriend sped down the highway. I just wanted to feel alive, you know? And coke made me feel alive.

Plus, aside from this, it didn’t really cause that many problems in my life. I held down a job and progressed in my career. The friends who did coke with me also had 9-5s. They were artists and teachers and engineers. We paid for our drugs with pay cheques earned the good old-fashioned way, at corporate jobs or through freelance gigs. We looked after each other. We had fun. We laughed a lot. We danced. No one got arrested. No one died. And no one seemed to mind that I was high all the time, so I didn’t really mind either.

In fact, I looked forward to it. When I first started doing cocaine I didn’t want it to become a problem, so I’d make myself wait until 10 p.m. on Friday night before I did my first line. I thought this little ritual proved that I had willpower and restraint. But after a while, I stopped waiting for 10 p.m. Then I stopped waiting for Fridays. After a little while longer, I had three dealers’ numbers saved in my top 10. I was hooked. I loved doing a quick line before I went out. I loved the way it felt riding the streetcar high through the city. I loved a quick bump before a quick fuck. I loved doing it while I was getting ready to go out somewhere, with the record player spinning as I put on some eyeliner, stopping to do bumps between drinks. It was one of my favourite routines, the act of getting ready. The act in itself.

I didn’t realize it had become such a crutch, filling a void alcohol didn’t fill anymore. I was used to coke, and I felt more like myself when I was on coke, or at least more of the self I wanted to be. I felt confident, sexy and smart. It made me social and outgoing. I thought it made me fun! This is exactly how I used to feel about alcohol. Except I didn’t realize that it had taken the place of alcohol, because the alcohol never stopped either.

I’ve been playing the part of the party girl, though perfectly cast, for far too long. Coke was helping me to maintain an image I’m not so sure I want to maintain anymore. When I came to that February morning, I knew it was time to stop hiding under a veil of powdered confidence and liquid courage. It was time to say good-bye.

In like a lion, out like a lamb. That’s how this felt to me. And maybe this means my story is a happy one and that I got out before things got too bad. Still, it’s been harder than I expected. I crave it almost every weekend, talk about it too much, and find myself yearning for it, especially after a few drinks. I haven’t yet been able to bring myself to delete the numbers in my phone, though I have stopped responding to text messages from business-savvy dealers. I’m aware that temptation is a dangerous mistress. While I have no intention of indulging, there is comfort in knowing she’s just 10 digits away. Like the ex-smoker with a pack of cigarettes on the top shelf of the pantry, I keep it just out of reach. Just for now. Just in case.