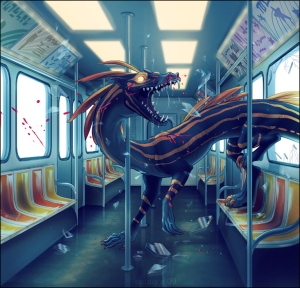 A few days ago, I was riding the subway, and there was a man talking to himself. Now this in and of itself is not entirely an oddity – there are subways, and men ride them, and sometimes the men (and, indeed, the women) who ride the subways talk to themselves. However, while I don’t usually listen to the people who talk to themselves (I prefer to eavesdrop on conversations and sneakily record them to use as dialogue later), something about what this man was saying caught my ear, and I decided to listen further.

This particular man was speaking about dragons. More specifically, he was talking to Lucifer about dragons – how us, humans, as a species had doomed ourselves from the beginning, because we killed all the dragons and pretended they were just regular dinosaurs.Back when the world was new, we killed all the dragons, and cut off their wings, and that’s why we are so awful as a species, and all bound for hell, etc. And yet, when this man told other people about how we as a species killed all the dragons, the other people would simply say: “Whatever. Everyone’s done things in their past that they’re ashamed of.” And this man was so very upset, because why couldn’t people understand that this was not just a minor transgression – we killed all of the dragons. There used to be dragons, and we killed them, and we cut off their wings, and we tried to pass them off as regular dinosaurs, because we were so afraid of what would happen if people found out there used to be dragons. And then this man said, “I wonder if these people” – meaning the other passengers – “I wonder if these people know that they’re a bunch of soulless robots, because they don’t believe in dragons.” And then he said; “I wonder if these people think I’m a robot. Probably they do. Sometimes I think I’m a robot.”

These three sentences, to me, were so heartbreakingly human: the condemnation of others for being different than you, while inside there lurks the fear that you secretly embody the very thing that you hate. For all that I am (supposedly) going into the business of recreating human emotion and human suffering, I have never experienced half as much emotion as this man did, simply over the fact that we’ve killed all the dragons, and over the fear that he is a robot. His final statement also spoke to me, like nothing has for a very long time. I frequently fear that I am a robot living in a world filled with robots.

Now at the same time, there was another man on this subway, sitting across from me. He was an attractive young man, with coarse black stubble and large glasses and a dark brown vintage hat that went well with his tan vintage coat. He was holding a new edition of 1984, and every few minutes he would glance up at the dragon-man and glare at him. He would shoot these awful, disapproving looks at the dragon-man, every time the dragon-man uttered a swear word, or got a little bit too loud, or stumbled around drunkenly.  This young hipster is a part of My People. He is smart, well educated, comparatively wealthy (although he complains about how poor he is), and fully immersed in the culture of Montreal. This young hipster embodies the sorts of people that I surround myself with on a day to day basis, and he is the sort of person that I frequently hope I am – well put together, smart, engaging, cultured.

It was a Kindle.

This image, of this intelligent, well put together lad holding a Kindle encased in a 1984 book cover, led me to a lot of revelations. Most of these involved jokes about books and judging them by their covers. Some of them included trite commentary on robots hiding in plain sight – the technologically cold hidden by the intellectually human. A clockwork orange, if you will. (I stole that!)

I think this may be the point when I should worry about myself – when the man talking about dragons and robots to himself has become the person with the most real and stirring words. The attractive, well put together young man has become the crazy phony, and the man talking to himself has become the sane one. A homeless person with severe mental health problems has said a deeply deeply personal thing about himself, and I had thought, yes! That is true of me as well, this deeply personal thing! At this point you’ve got to think – would it be a good idea if I started maybe seeing someone?

I feel as though this young gent with the Kindle could have told me what’s going on, and that seeing someone might maybe be a good idea.

Or, instead, I could keep having empathic life connections with homeless men in subways who talk to themselves.

Let’s go with that one.

Calla Wright is an aspiring playwright and all round theatre-beast, hailing from Edmonton. She likes a bunch of things and also has hobbies.